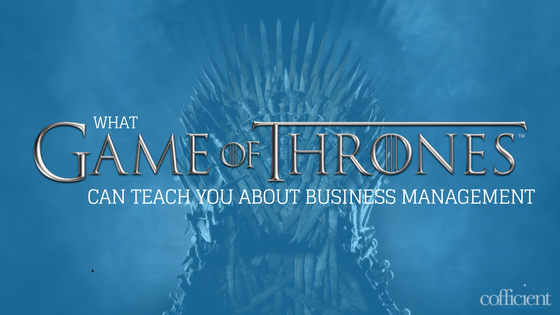 What Game of Thrones Can Teach You About Business Management

If you haven’t been watching Game of Thrones, you are missing out on one of the greatest TV shows. Game of Thrones is one of the most popular television shows in history. It dominates the headlines whenever a new episode airs. For many, it is the peak of entertainment. In this article we will see how this entertainment relates to the real world?

Now, if you haven’t watched Game of Thrones, this post might have a few spoilers that give away some of the plot. That said, it also has a few key lessons that can help you in business management.

Don’t Lose Out Because Of Poor Resources

When you are crunched for time and are firing on all cylinders, it’s easy to get caught up in the hustle and bustle of a busy day. Throughout the series we have watched many armies lose fights because of poor resource management. It was only when the army has got the correct equipment and systems that they are successful.

Like with any business you always need to ensure your product/service offering is not suffering because of inadequate resources or fragmented tools. If you have poor stock management or  you are finding efficiency is hurting your business you may need to look at implementing different systems and processes. By ensuring that you manage both your time and resources effectively you can get a clear view of your business. In Game of Thrones, success is achieved by having the right resources armed with the right knowledge, experience and tools at the right time and place. Or in Dany’s case having some dragons!

As we often hear, Lannister’s always pays their debts. The Lannisters have built a reputation on paying money they are owed. As a result, they have no issue raising funds from the Iron Bank, making deals with other houses and it saves Tyrion on more than one occasion.

If the Lannisters hadn’t built up their reputation as trustworthy debtors, Tyrion probably wouldn’t have survived very long. Nor will your company if you fail to inspire the same confidence for business finance.

Reputation and credit score is important in the financial world. Keep on top of your debts and you will earn the trust of suppliers and investors. Fail to do so and they will abandon you.

Does this sound familiar to you?

You know when it’s coming. You don’t know exactly what form it will take or what will happen. But something will arrive one day that changes everything. That puts an immense amount of strain and pressure upon you — something that, if it catches you without warning, it will use up most of your resources.

In the context of Game of Thrones, this sounds an awful lot like Jon Snow’s highly-anticipated winter. In the business world, can be caused by financial turbulence caused by anything such as Brexit or not properly planning for year-end.

Just as it is in Game of Thrones, the key to surviving year end reporting is preparation. Jon Snow is preparing his people for the winter. They are gathering supplies, fortifying their defences and training soldiers for what is to come.

The ones that make it through do so because they were able to adapt and were ready to meet the “winter” head on.

Jon Snow has learned the hard way that not all relationships are created equal. As such, it’s important to manage your relationships effectively. While Snow was having a lot of success, he quickly realised that some people weren’t people he could trust or wanted to be associated with.

As well as building relationships with businesses (suppliers and distributors) you also need to build relationships internally with other employees and departments (finance, marketing, customer service). In business a good way to keep tabs of your relationships is through a CRM system. So you understand customer and business partners requirements to be able to deliver better. Knowing your customer is vital to business success – Snow was able to understand the needs and wants of his acquaintenances based on previous feedback.

As time goes on, build relationships carefully and implement systems/processes that promote collaboration. While it’s unlikely that the man at the boardroom table is a character from the Game of Thrones, it’s easy to get caught up with someone who doesn’t share the same ethics or goals as you do.

In Game of Thrones you see the people that use insight survive. Little Finger, Tyrion and Lord Varys are often the right hand and provide insight always survive. Not the strongest or best fighters but armed with the knowledge they are, some people would argue, the most influential and important characters.

In business, what is important is having good data, smart people and a structure or culture that increases the chances insights will be used by the business.

Leadership matters. In Game of Thrones, some govern out of fear (mostly the Lannisters), others command respect (Daenerys and the Starks). Knowing your style can allow you to better understand its strengths and weaknesses, to adjust as needed and ideally surround yourself with a team that complements you.

The kind of leader you are will also depend on your goals and ambitions. Queen Cersei’s immutable desire to see the Lannisters win and be at the head of a thousand-year legacy means she will stop at nothing to get her way, even if it means killing innocents and burning down the enemy. Jon Snow, on the other hand, is focused on building alliances because he is not governed by ego but by a desire to live in peace and see people around him prosper.

Leadership is reflected in culture that then becomes the norm, so be aware that prioritising efficiency over all else – for example – may lead to less camaraderie between colleagues and more of a cutthroat environment than a more people-centric approach.

To speak to someone about software for your business, get in touch