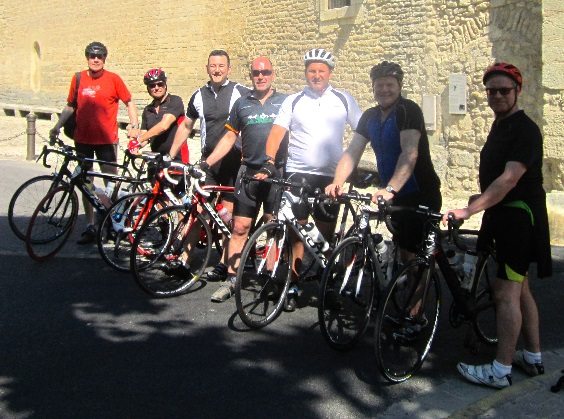 A Tale of Endurance – And Raising Money For Simon Community Scotland

We’d never claim nor want to be ‘proper’ cyclists. We enjoy the company, the challenge, the exercise but mostly the food and drink. So a trip to Provence and a cycle up the iconic Ventoux, why not? It also happened one of our team was born and bred in the shadow of the mountain and could even speak the lingo so we knew we wouldn’t starve. So without much in the way of risk assessment we heartily agreed to Cycle up Mont Ventoux in June of this year. Straight away we got into training, well maybe it was the next day. We decided we wanted to raise money for the Simon Community Scotland and their Nightstop service which helps prevent young people avoid sleeping rough.

6th of June D Day, a long easy breakfast, no rush as we wondered where did all that training time go? Not in training that was for sure. All of us could have done with an extra two years training but we were picking up our hires at Ventoux Bikes in Malaucene and before long we were off on the D19 to Bedoin and from there to climb a mountain.

When we started the climb we soon started to thin out. It was a constant climb, relatively easy at first but the heat started to build and the gradient started to climb. Going through the trees we might have thought with some shade it would be a bit cooler but if anything it was worse. There was no air and it just kept getting hotter. The constant peddling and the by now warm water in our bidons did nothing to cool you down. Only the mosquitos that frustratingly were flying faster than we were cycling took your mind off the heat.

Breaking through the trees into the moonscape was fantastic and a real lift. Café Reynard wasn’t far off and there was no way we weren’t going to stop and cool down. It was when you stopped that the nausea hit and it took plenty of fluids and some food to settle us down before getting back on the bike for the last leg with revived spirits and energy.

The climb to the top was a joy with every peddle stroke taking you closer. Speed and spirits were up and even out the saddle for that last 100 yards to the summit. The relief, the view and the achievement was fantastic. We were soon all at the top and our decision to have a lazy breakfast came back to bite us. To the North black clouds that were befitting of Mordor were moving in fast, the thunder was getting louder and closer. Our time at the summit was short as almost instantly the light went, the temperature plummeted and along with the thunder and fork lightening hailstones the size of garden peas started battering lumps out of us.

There was no option other than to get on the bikes (quick!), and get off the mountain. The further down we got the warmer and hopefully dryer it would be. We took to the road with the hailstones snapping at every bit of exposed flesh, and there was a lot. The pain was ridiculous as the hailstones hit the fingers sticking out of our mitts, our legs, bare arms and even found their way through the vents in our helmets!

We kept going, by the time we hit the trees we couldn’t stop, the lightening was rapid and hitting trees either side of us less that 20 yards, probably should say meters away. The hail had turned to torrential rain and the road were streams, couldn’t see a thing out our glasses and our brakes we near useless. Most of us were wondering if the skinny tyres we were riding on would insulate us if the lightening hit the water logged roads. Probably not but we were certain standing next to a tree would not be clever. By the time we got to the bottom we were numb. One of the guys had a puncture but none of us could move our fingers so we needed to get help from a motorist. Our legs and arms looked like we’d been hit with shot and our skin had lost its waterproofing, our bones were wet! Dry clothes, Pastiche and a fabulous meal later at the Les Terrasses du Bassin and all was well with the world. Would we do it again, absolutely though next time we might do some pre event training. We’re still happy to receive donations at BT Mydonate