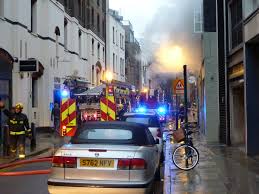 According to the BBC, more than 100 businesses have been affected overnight by the Holborn fire.  35 fire fighters and 6 fire engines are currently in place on Kingsway where road closures have caused traffic chaos.  Thankfully no one has been hurt but 5000 people have been displaced as the fire service evacuated the area.

At Cofficient we happen to know that at least one business in the locality has been less affected than others because we have just implemented SAP Business By Design – a cloud based ERP software – for them.  In practice this means that the business can operate from any location (or multiple locations) with little interruption.  The company’s vital infrastructure will be affected little by the disruption.

From a disaster discovery perspective they also have nothing to fear.  All their IT “stuff” is hosted in the cloud so their data is more secure and safer than if it had been hosted on premise.  Safe, available,  data 24 hours a day, 7 days per week – encrypted and locked down in secured backed up data centres – means that unexpected disasters are of little consequence to this business now.  It’s the data equivalent of building your house out of bricks rather than straw and wood.

So while the fire blazes on, our client blazes ahead.