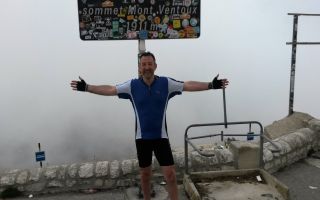 Cofficient in Mont Ventoux Climb Ahead of Tour de France

Cofficient Director, Paul Grant, had his head firmly in the clouds this weekend when he cycled the infamous Mont Ventoux in France.   Cycling with 6 companions, including Cofficient client Hugh Hill from Simon Community Scotland, Paul Grant finished the climb in just under 3 hours.

The 20km climb – the equivalent of two munros – forms part of the Tour de France route.   In just over a month around 200 cyclists will take on the mountain as part of 21 days of racing.

An amateur cyclist for a number of years Paul Grant says, “It’s a tough ride!  I completed Mont Ventoux faster than last year, but doing this cycle really highlights how fit these Tour de France riders are.  I take my hat off to them”

A keen cyclist and gym goer, Paul Grant (Cofficient Director and SAP ByD specialist) advocates a healthy lifestyle and work life balance.  He credits cloud computing with enabling work life balance.  “As long as I can get an internet connection, I could be logging on to my system and transacting on top of the mountain ” he says.  “All joking aside, being able to work from home or whilst on the move frees up time.  That time can be reinvested straight back into personal development – like pursuing a passion for sport for example”

Speaking about his love of cycling Paul says, “I have been keeping my hand in by doing big cycling events for the past 15 years or so.  I get quite evangelical about it actually.  After knowing Emma (Sales and Marketing Director at Cofficient and self professed gym hater) for almost a decade I consider it a personal achievement to have converted her into a keen runner and gym goer”.

Paul Grant is the brains behind the now famous Scottish cycling tour, “5 Ferry Challenge“, last year cycling to raise funds for Scottish Autism.  Dreamed up over a few pints in a pub over a decade ago, the 5 Ferry Challenge is now one of Scotland’s best known events and attracts hundreds of cyclists to North Kintyre and the Firth of Clyde each year.

Speaking ahead of this year’s 5 Ferry Challenge in August, Paul has issued an open invite to anyone who wants to join the Cofficient team, “it’s open to all cyclists.  We often go with clients.  Last year we were joined by Aspen’s Paul Harkins.  But I invite fellow accountants, Scottish businesses and cycling enthusiasts to get in touch via the 5 Ferry Challenge website and tag along.  It’s always a day to be remembered!”